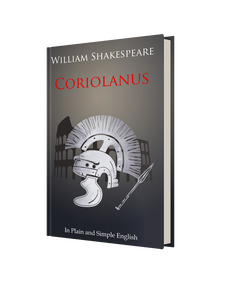 T.S. Eliot said Coriolanus was superior to even Hamlet; Ralph Fiennes loved it so much he directed, produced, and starred in modern telling of the play. So if everyone loves it so much, why is it so hard to understand? Let's face it...Shakespeare can be difficult to read! Let BookCaps help with this easy to read modern retelling.

If you have struggled in the past reading Shakespeare, then BookCaps can help you out. This book is a modern translation of Coriolanus.

The original text is also presented in the book, along with a comparable version of both text.
Coriolanus Lesson Plans Also Available Here

Purchase A Copy of Coriolanus in Plain and simple English Now!

Excerpt of CORIOLANUS IN PLAIN AND SIMPLE ENGLISH

SCENE I. Rome. A street.
[Enter a company of mutinous citizens, with staves, clubs, and

Before anything else happens, listen to me!

Before we proceed any further, hear me speak.

Is everyone here ready to die fighting instead of starving to death?

You are all resolved rather to die than to famish?

First of all, as you all know, Cauius Marcius is Public Enemy #1.

First, you know Caius Marcius is chief enemy to the people.

Let’s kill him, and then we’ll buy grain for however much we want to pay!

Let us kill him, and we'll have corn at our own price. Is't a

Let’s stopping talking about it and do it! C’mon, let’s go!

No more talking on't; let it be done: away, away!

Hold up a minute, folks.

They say we’re poor, and the noblemen are rich.

We are accounted poor citizens; the patricians good.

What the powers that be gorge on would keep us from starving; if they just gave

What authority surfeits on would relieve us; if they would yield

us their extra food, as long it’s not spoiled, we would think

us but the superfluity, while it were wholesome, we might guess

that they were saving us for humanitarian reasons; but they think we’re too expensive:

they relieved us humanely; but they think we are too dear: the

our suffering, our misery

leanness that afflicts us, the object of our misery, is as an

makes them feel richer; our suffering is

inventory to particularize their abundance; our sufferance is a

their gain. Let’s get even by killing them with our pitchforks before we

gain to them.--Let us revenge this with our pikes ere we become

become skinny as a rake: the gods know I’m only saying this stuff because I’m hungry,

rakes: for the gods know I speak this in hunger for bread, not in

not because I’m bloodthirsty.

Would you go after Caius Marcius more than the other noblemen?

Would you proceed especially against Caius Marcius?

Yes, he’d be first: he’s a dog that attacks the common people.

Against him first: he's a very dog to the commonalty.

Have you thought about everything he’s done for this country?

Consider you what services he has done for his country?

Yeah, I thought about, and I would praise him for it,

Very well; and could be content to give him good report for't,

but I don’t need to because he’s proud of himself for doing it.

but that he pays himself with being proud.

Don’t be so nasty.

Nay, but speak not maliciously.

I’m telling you, all that famous stuff he did, he did to stroke his own ego:

I say unto you, what he hath done famously he did it to that end:

country, I know he did it to make his mama proud, and in part to make himself proud,

country, he did it to please his mother, and to be partly proud;

which he is, at least as proud as he is good.

which he is, even to the altitude of his virtue.

You blame him for it, but he can’t help it—that’s just his nature. But at least

What he cannot help in his nature you account a vice in him. You

you can’t call him greedy.

must in no way say he is covetous.

Even if I can’t call him greedy, I can call him plenty of other names; he has

If I must not, I need not be barren of accusations; he hath

so many faults that I’d get tired of naming them, and have more to spare. [Shouts inside.]

faults, with surplus, to tire in repetition.  [Shouts within.]

Who’s shouting? The other side of the city [Rome] is revolting, why

What shouts are these? The other side o' the city is risen: why

are we standing around talking? To the Capitoline Hill! [Location of the main temple.]

stay we prating here? to the Capitol!

Shut up! Who’s that?

Worthy Menenius Agrippa; one that hath always loved the people.

Yeah, he’s alright; I wish the rest of the ruling class was like him!

He's one honest enough; would all the rest were so!

What’s going on here? Where are you going

What work's, my countrymen, in hand? where go you

with those bats and sticks? What’s the matter? Please, tell me.

With bats and clubs? the matter? speak, I pray you.

Our business is not unknown to the senate; they have had inkling

what we were going to do for two weeks now, and now we’ll do exactly what they

this fortnight what we intend to do, which now we'll show 'em in

expected. They say we poor dudes can’t get a date because we smell bad,

deeds. They say poor suitors have strong breaths; they shall know

but they’re going to find out that we are strong.

we have strong arms too.

Hey, fellas, my friends, my neighbors,

Why, masters, my good friends, mine honest neighbours,

will you give up and go home?

Will you undo yourselves?

No, we can’t take it any more!

We cannot, sir; we are undone already.

I’m telling you, my friends,

I tell you, friends, most charitable care

the noblemen take good care of you. If you want to blame someone

Have the patricians of you. For your wants,

for your problems and your hunger, you’d be better off

Your suffering in this dearth, you may as well

attacking heaven with all your weapons than using them

Strike at the heaven with your staves as lift them

against the Roman government, which is so strong

Against the Roman state; whose course will on

that it would crush you even if you had ten thousand

more ways to block it than you could ever

Of more strong link asunder than can ever

possibly have. This recession

Appear in your impediment: for the dearth,

was caused by the gods, not the rich, and

The gods, not the patricians, make it; and

praying to the gods, not fighting, is the only thing that will help. I’m sorry

Your knees to them, not arms, must help. Alack,

that times are so tough that you people all lost your minds,

You are transported by calamity

Thither where more attends you; and you slander

the good people who run this country, and who love you like they were your fathers,

The helms o' th' state, who care for you like fathers,

When you curse them as enemies.

Care for us! True, indeed! They ne'er cared for us yet. Suffer us

us starve, even though they have buildings full of extra food; they made laws

to famish, and their storehouses crammed with grain; make edicts

about loan-sharking, but they benefit the loan-sharks; they undo any good law

for usury, to support usurers; repeal daily any wholesome act

that was designed to hurt the rich, and make more bad laws

established against the rich, and provide more piercing statutes

every day to punish and enslave the poor. If the wars don’t take all our money,

daily to chain up and restrain the poor. If the wars eat us not

they will; that’s how much they love us.

up, they will; and there's all the love they bear us.

You have to admit

that either you’re all just making trouble,

or you’re just stupid. Let me tell you

Or be accus'd of folly. I shall tell you

a little story: maybe you’ve heard it before,

A pretty tale: it may be you have heard it;

but since it supports my point, I think I’ll just

But, since it serves my purpose, I will venture

bore you with it one more time.

To stale't a little more.

OK, I’ll listen; but don’t think you can make us forget our

Well, I'll hear it, sir; yet you must not think to fob off our

troubles with a story. But, if you want you, go ahead and say it.

disgrace with a tale: but, an't please you, deliver.

Once upon a time, all the organs in the human body

There was a time when all the body's members

rebelled against the belly, and accused it of

in the middle of the body, not doing anything

I' the midst o' the body, idle and unactive,

but sucking up food and never doing any real

Like labour with the rest; where th' other instruments

and, working together, did the bidding

And, mutually participate, did minister

of the appetites and inclinations

Unto the appetite and affection common

of the body as a whole. The belly answered:

Of the whole body. The belly answered,--

Well, what did the belly answer?

Well, sir, what answer made the belly?

I will tell you. It replied with a smile

Sir, I shall tell you.--With a kind of smile,

that wasn’t an ordinary smile, but was like this--

Which ne'er came from the lungs, but even thus,--

For, look you, I may make the belly smile

as we speak—a smile that taunted

As well as speak,--it tauntingly replied

To the discontented members, the mutinous parts

that were jealous of what he received; just like

That envied his receipt; even so most fitly

you people trash talk the rich senators because

As you malign our senators for that

They are not such as you.